The first attempt to provide fire protection to the Chestnut Hill section of the city was made during 1872. Hand Engine A was organized with one member, Hoseman George W. Shannon. The company was assigned two pieces of apparatus. A hand-drawn, hand-operated pumping engine and a hose cart equipped with 750 feet of leather hose. If dispatched to an alarm, the company would be assisted by volunteers from the neighborhood. Hand Engine A was disbanded during 1881.

Chemical 1 was organized Highland Avenue and Main Street (Germantown Avenue) in Chestnut Hill in 1886. This brought a fire department presence back to the neighborhood that was lacking since Hand Engine A was placed out of service during 1881. The original company roster consisted of the following members:
Foreman John C. Parsons
Engineer Hiram Schlafer
Driver Jacob Kephart
Hoseman John Maney
Hoseman William Thomas
Hoseman William B. Crout
In 1891 Chemical 1 was placed out of service and Engine 37 was organized. Upon organization, the company moved into a new station located at Highland Avenue and Shawnee Street. Engine 37’s original company roster was as follows:
Foreman John C. Parsons
Engineer Ephraim Jones
Driver Jacob Kephart
Fireman Hiram Schlafer
Hoseman William Thomas
Hoseman John Money
Hoseman William Crout
Hoseman Theodore Nicolle
Engine 37 still responds from this firehouse today. It is the oldest continually operated station in the city of Philadelphia. The major problem with the firehouse has been the narrow doors. They were built to house horse-drawn apparatus. Because today’s apparatus are much wider, the mirrors must be pulled in and all handrails must be removed. The building is currently undergoing renovation. 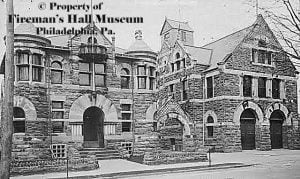 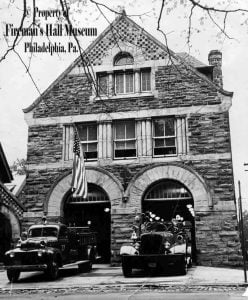 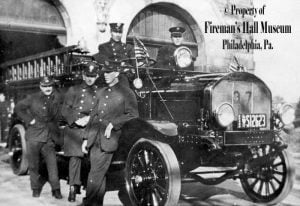 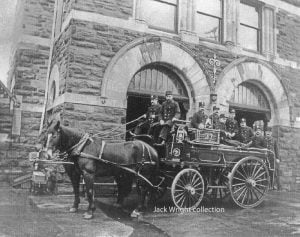 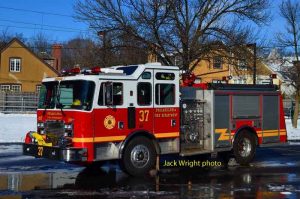