The History of PFD Fireboats

The History of PFD Fireboats

With the shoreline along the Delaware and Schuylkill Rivers lined with refineries, shipyards, and manufacturing plants, the need to provide fire protection to these businesses was addressed in 1875. Two vessels equipped with firefighting equipment were made available by the Philadelphia Police Department. The William S. Stokely was outfitted with one deck monitor and a 1,000 GPM pump. The Samuel G. King was equipped with one deck monitor and a 1,500 GPM pump. A third police boat was provided for fire responses approximately 1883. All of the police vessels were staffed by a crew of eight.

On September 1, 1893 the Philadelphia Bureau of Fire placed the first true fireboat in service, the Edwin S. Stuart. It was built by Cowles Engineering of Brooklyn, NY. With a maximum speed of 10 MPH, it was outfitted with two 6,000 GPM pumps. It also featured one deck mounted monitor and eight 3 ½ inch hose connections. The Stuart was stationed on the Delaware River at the Race Street Pier. Commanding the crew of seventeen, was Foreman Edward A. Waters. Waters would rise to the rank of Chief Engineer, serving in that capacity from March 3, 1911 until his retirement on January 27, 1914.

On March 15, 1913 a General Order was issued outlining the response to fires for the police boats. The Stokely responded to all fires north of Poplar Street. The Ashbridge covered the area between Poplar and South Streets. Fires south of South Street were covered by the King. Each boat would respond to second alarms in its adjoining district and all boats responded to three alarm fires. Two alarm fires along the Schuylkill River were covered by the King. The fireboat Stuart responded to all alarms along both rivers.

After years of requesting additional resources to battle fires along the waterfront, two new fireboats were delivered in 1922, the Rudolph Blankenburg, assigned as Fireboat 2, and the J. Hampton Moore was assigned as Fireboat 3. Both vessels had a pump capacity of 10,000 GPM. They also featured a nozzle mounted on a twenty-eight foot tower, two monitors mounted on fifteen foot towers, and one monitor mounted atop the pilot house. At this time the Edwin S. Stuart was given the designation of Fireboat 1. With the three fireboats in service, the police department discontinued their fire boat service.

Philadelphia’s fireboat fleet received a major upgrade beginning in 1948, when the department took delivery of the Bernard Samuel. It was outfitted with four 1,500 GPM pumps. Among the various monitors mounted on the vessel was one atop a twenty-four foot folding mast. During 1950, two additional boats were placed in service, the Benjamin Franklin and the Delaware. These were built to the exact specifications as the Bernard Samuel. The only difference was the Franklin and the Delaware were slightly longer.

The first new fireboat purchased by the Philadelphia Fire Department was placed in service in 2007. Taking into consideration the changes in the port of Philadelphia since the 1940’s, with the increase in pleasure craft plying the waters and marinas lining the shore, the new boat was built more for speed than large pumping capacity. Named the Independence, it has a maximum pump capacity of 5,500 GPM along with four mounted monitors. One is located atop the deck house, one on the fore deck, and two on the after deck.

Two new craft were added to the department’s fleet in 2019 and 2020. Both were built by Viking Welding and Fabrication to the same specifications. While the emphasis for these vessels is speed for water rescues they both feature 1,500 GPM pumps and one mounted monitor. The Liberty was placed in service during 2019 as Marine Unit 4. It is assigned to the Schuylkill River with Fireboat 2. The Edward A. Waters, named after the original commander of Philadelphia’s first fireboat, is assigned as Marine Unit 3. It is stationed with Fireboat 1 at the U.S. Coast Guard station on the Delaware River at Washington Avenue. 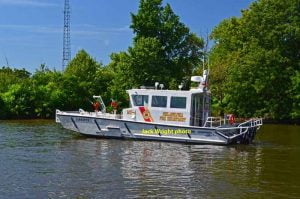 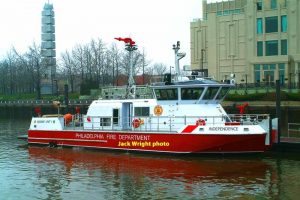 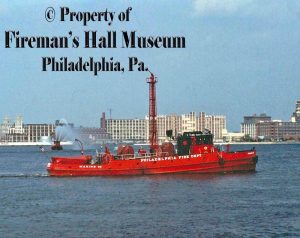 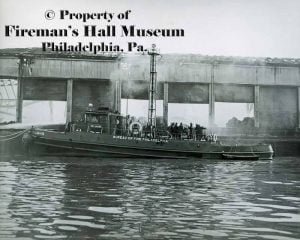 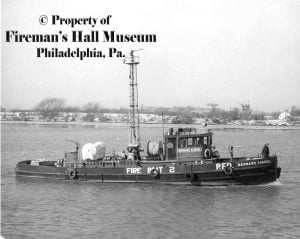 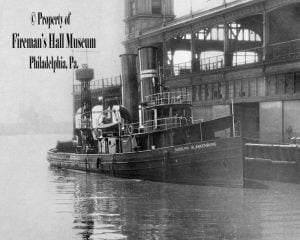 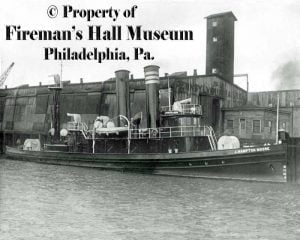 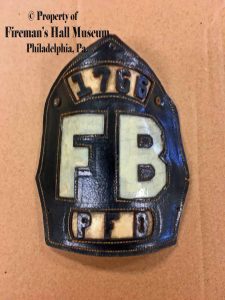 Fronticepiece from when there was only one boat - pre 1922 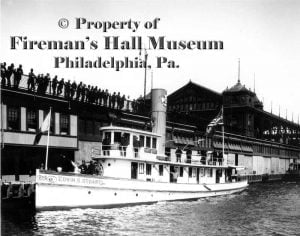 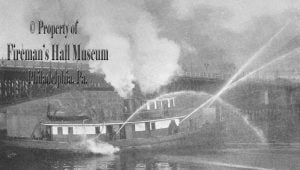 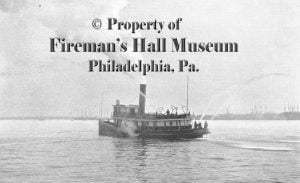