In 2009, the Board of Directors of the New England Fire & History Museum in Brewster, MA donated to the Philadelphia Fire Department Historical Corporation a Philadelphia style first class hand engine made circa 1840 by Joel Bates. Legend has it that this engine was salvaged from the Delaware River in Philadelphia in the early 1950s at an extremely low tide, a story that conservator Brian Howard felt had merit based on visible damage to the engine. The engine was ultimately obtained by The Morris Agency in South Orange, NJ for their museum which became the foundation of the New England Fire & History Museum.

Joel Bates was an engine manufacturer whose workshop was at 13 Drinkers Alley (now Quarry Street) just a few feet east of Fireman’s Hall Museum. Born in New Jersey in 1802, he moved to Philadelphia and became an active member of the community, joining the Reliance Fire Company. By 1827 he began building hand engines, and built about 25 engines between 1827 and 1848.

Joel Bates published an advertisement in the Public Ledger dated November 3, 1847 for the sale of a new suction fire engine and another classified ad in the North American Newspaper in Philadelphia dated June 6, 1848 reads: “The undersigned having sold the Tools, Fixtures and etc. of his MACHINE SHOP, to Mr. A.L. ARCHAMBAULT, he respectfully recommends him to the former customers of the establishment, and to the public in general, as being a man worthy in all respects of their confidence and patronage. JOEL BATES No. 13 Drinkers Alley.”

In 1850, Joel Bates is listed as a soap maker in the rear of 364 N. 3rd Street in Philadelphia but by 1852 he has moved west and appears in a census for San Francisco County, CA as a mechanic. He next appears in the Federal Census of 1860 in Soquel, Santa Cruz County, CA as a logger where Bates died on October 21, 1861, aged 59. His headstone is located in Soquel Cemetery, Soquel, Santa Cruz County, CA. The stone reads “JOEL BATES/Formerly of Philadelphia, Pa./WHO DIED/ October 21, 1861,/aged 59 years.”

Bates’ legacy lives on in the engines he built for various fire companies a number of which are listed below. Sadly, only three remain today for public viewing, the one at Fireman’s Hall Museum, one in the Phoenix Hall of Flame Fire Museum and one at the Union Fire Company in Medford, NJ. Unfortunately, we don’t know who commissioned the one now housed at Fireman’s Hall Museum. 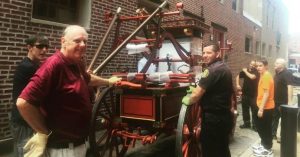 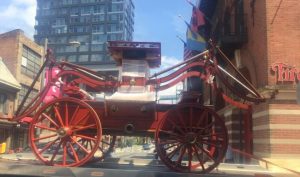 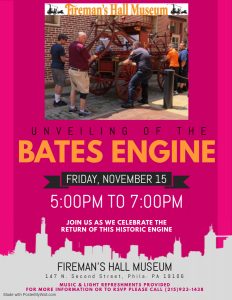 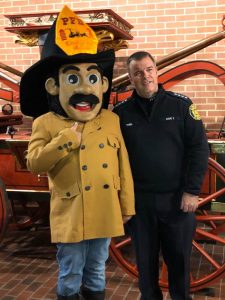 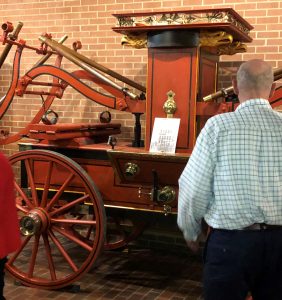 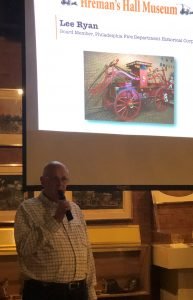