Engine 24 was organized November 1, 1872 in the station formerly occupied by the Warren Hose Station on the northeast corner of 21st and Ellsworth Streets. The Warren Hose Station was established on March 15, 1871 when the paid department went into service. This company was staffed by one member. A hand-drawn hose carriage carrying 650 feet of leather hose with Jones Snap couplings was assigned to the unit. The company is not listed on any box cards, so it is not known how, or if, it was assigned to respond. It is assumed if the unit did respond, the lone hoseman assigned, would be assisted by neighbors. The building was rented from the former volunteer company that owned it, the Warren Hose Company #29. Rent for 1871 was $250.00.

Hoseman Thomas Hollick was assigned to the Warren Hose Station. He was assigned to Engine 9, in Mount Airy, but detailed to the hose station. His home address is listed as 21st and Ellsworth Streets. When Engine 24 was organized in 1872, Hoseman Hollick was not assigned to the new company but returned to Engine 9. This is interesting since in the early days of the department, the members worked twenty-one hours a day, with an hour and a half off for lunch and an hour and a half off for dinner. They usually went home to take their meals. It must have been an adventure to get back and forth from Mount Airy and Point Breeze in 1872! Thomas Hollick resigned from the department on October 20, 1873.

During 1890, Engine 24 moved to a new station at 1214 S. 20th Street. They would remain here until 1950 when they moved in with Engine 60 at 24th and Ritner Streets while a new firehouse was built for them. The company would move back to their new station at 20th and Federal Streets in1952.

At the time they moved into the new station, the department was working three platoons, which changed three times each day, 8 AM, 4 PM, and midnight. When working nights, members were not permitted to sleep. Because of this, the firehouse was built without a bunk room. On January 22, 1955 the work schedule was changed to two ten-hour days, followed by two fourteen hour nights, and then two days off. The working hours were reduced from a fifty-six hour week to a forty-eight hour week. As a result, the sitting room at Engine 24 had to be converted into a bunk room. That explains the unusual layout in that station. 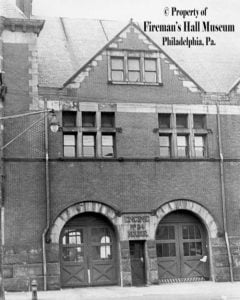 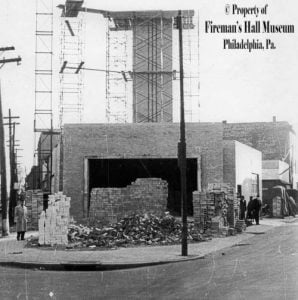 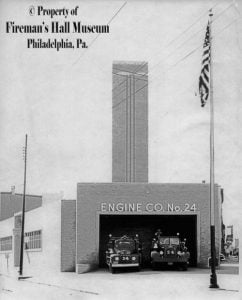