Engine 17 was organized March 15, 1871 on Race Street east of Broad Street in the firehouse formerly occupied by the Good Will Fire Company. The city paid $416.66 in rent during 1871.

Mrs. Henk was the company matron.

During 1894 they moved to a new station in rear of 253 N. 15th Street. Responding from this station was often delayed due to it being located behind a police station and across from a hospital. On July 29, 1926 Engine 17 moved to a new station at 1328 Race Street. They were housed here along with newly organized Truck 23 and the Rescue Squad. In addition to the fire companies, department headquarters was housed here as well. Ladder 23 moved in with Engine 20 at its new station at 10th & Cherry Streets on June 5, 1956. (Heavy) Rescue 1 was deactivated on February 11, 1963, but came back as a (Light) Rescue 1 on February 18, 1963. On July 10, 1968, Rescue 1 moved to Engine 20’s station. Engine 17 was disbanded on November 20, 1972. Headquarters remained here until January 21, 1976 when they moved to their present location at 240 Spring Garden Street. The building was demolished in 2007 to make way for expansion of the convention center. 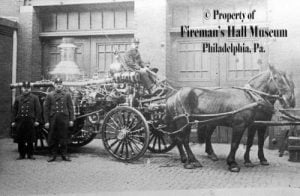 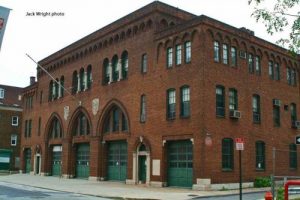