Truck “H” was organized on October 10, 1894 in an existing building at 5000 Germantown Avenue, the northwest corner of Seymour Street, which was altered to house a truck company. The site was purchased for $13,500. The building still exists today with alterations to the second-floor exterior and is occupied by a True Value hardware store.

In 1906, the building was condemned as far as fire department use was concerned, and Truck 8 was moved in with Engine 19 at 29-31 East Chelten Avenue until a new station for Truck 8 could be erected.

It took about 4 years for a new station to be built at 5231 Germantown Avenue, the southeast corner of Bringhurst Street, and on May 10, 1910, Truck 8 moved into its new quarters. The land cost $13,000, and $30,000 to construct the building. Since Ladder 8 abandoned the station in 1957, it has been occupied by various commercial establishments but is still recognizable as once being a fire station. What has puzzled many over the life of the building is a “Star of David” (Jewish star) in the brick at the top of the front of the station, causing many to think it was a synagogue.

However, in actuality, it is a combined Greek symbol. An upturned triangle was a symbol for fire, and a downturned one, a symbol for water. When combined, they make a 6-point star.

In the 1950s, an economic decision was made by the city to build combined engine and ladder stations. On October 9, 1957, Ladder 8 moved into a new station along with Engine 19 on the southeast corner of Chelten Avenue & Baynton Street in the heart of Germantown. Also housed in the station was Rescue 10 and Battalion Chief 9.

Currently, Medic 10 (old Rescue 10) has been moved to a station further up Germantown Avenue; and Battalion 9 has moved to Engine 12 in Manayunk. They have been replaced by Medic 28 and Deputy Chief 3. In 2021, Ladder 8 received a new aerial ladder with a 2-man bucket and is now known as Tower Ladder 8. 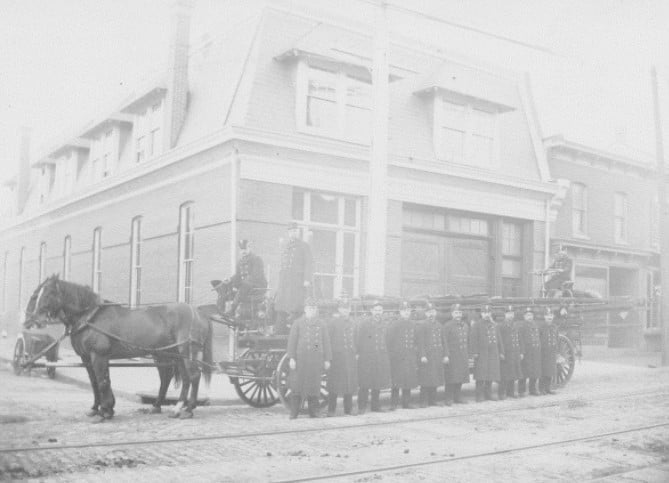