The evening of Thursday, February 26, 1920, was bitter cold with temperatures in the teens and a howling wind. Over two hundred diners were enjoying themselves at Kugler’s Restaurant, one of the city’s best-known eateries, located at 1412-20 Chestnut Street in Center City. Shortly after 8:30 PM, someone smelled smoke and an orderly evacuation of the building was begun.

At 8:46 PM Box 328, Broad and Chestnut Streets was transmitted for the fire. By the time Engine 4 arrived on location from their firehouse on Sansom Street, a short few blocks away, heavy smoke was pouring from the three-story building. Extra alarms were sounded culminating with the fifth alarm being struck at 10:26 PM.

The fire presented one of the most difficult exposure problems faced by the Bureau of Fire up to that time. The Kugler Building was situated between the twenty-two story Land Title Building and the eighteen story Franklin National Bank Building. Both buildings had windows overlooking the Kugler Building. As fire burst through the roof of the restaurant, the department had a difficult time keeping the fire from getting into the exposures under adverse weather conditions.

Fire fighters were able to limit extension to the exposures. No serious injuries were reported. 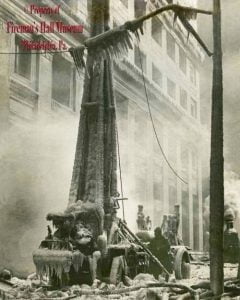 Water Tower 1 shown encrusted in ice, the morning after the fire while a steamer pumps away in the background. 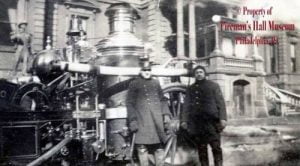 Engine 20 on a hydrant in front of the Union League on Broad Street with their 1899 LaFrance steamer.