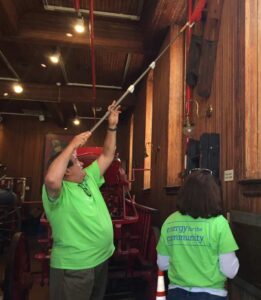 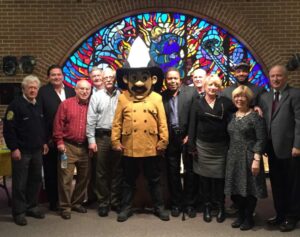 Ed McBride served on Fireman’s Hall Museum’s board of directors for nearly 25 years and was a passionate supporter. No job was too big – or too small as you can see by this photo of him dusting collections! Always willing to support initiatives it was thanks to Ed McBride and PECO that the museum has a fabulous collection of photographs of the Philadelphia Fire Department taken on March 15, 2006, the 135th anniversary of the department. Volunteers given disposable cameras fanned out to the various stations to grab these snapshots. Initially shown at Fireman’s Hall Museum, these photographs will soon be on our website for all to see.

Ed McBride initiated the annual golf outings for Fireman’s Hall Museum with a first outing taking place at the PECO golf course. In later years he teamed up with Rick Coppola and the NFSA group of avid sprinkler installers to turn a one time event into an annual outing looked forward to by many. We will miss his support but most of all his humor, good nature and love of life.