Philadelphia Association for the Relief of Sick and Disabled Firemen

The Philadelphia Association for the Relief of Sick and Disabled Firemen was instituted on November 24, 1834 and changed its name to the Volunteer Firemen’s Funeral Relief Association on May 28, 1872 by accepting a supplement to the original charter. This newly named association was organized on June 12, 1872.

In 1843, the association purchased four plots in Monument Cemetery in Philadelphia located near Broad and Berks Streets. A vault was constructed and on September 19, 1845, Jacob Kunz of the Globe Fire Company became the first fireman buried in the vault. He had been killed while battling a raging fire on September 17, 1845 at the corner of Broad and Cherry Streets.

In February of 1850, Henry S. Tarr was contracted to build a monument over the vault. Scharff & Westcott’s “A History of Philadelphia 1609-1884” describes it as “a conspicuous monument above a vault. A white marble panel-case has at the corners representations of fire-plugs. The shaft rising above bears upon the face in relief the horn, spanner, and torch. The names of the persons who sleep below and the dates of their deaths are on the sides.

A list of names of those buried in the vault was printed in the Board of Trustees Annual Report for the year 1919.

*Denotes died in the line of duty

Monument Cemetery closed in 1955, the site had been selected as the future home of the Raymond Rosen housing project. In 1956 the remains of members buried in the vault that were not claimed by family were removed to Lawnview Cemetery in Rockledge, Montgomery County, PA. The monument was also relocated to Lawnview. This relocation had gone unknown until recently when museum member Ed Welch contacted us to let us know that a friend riding a bike through the cemetery discovered the monument. Ed noted that the monument was badly weathered in some areas.

Museum researcher Lee Ryan researched records of both organizations and contacted Lawnview Cemetery. A representative of the cemetery emailed Ryan a copy of the cemetery records for Lot 60 graves #3 and #4 and provided information on the relocation of the monument and remains from Monument Cemetery. The cemetery list reads as follows:

With additional research, Ryan discovered that Henry D. Gardiner’s middle initial was actually “S”. Josiah Snyder was a member of the Columbia Hose Company and died on April 19, 1903. Harvey H. Downes died on February 3,1918 and was buried in the vault at Monument Cemetery that year (Downes was a member of the Shiffler Hose Company). His last known address in 1912 was the Odd Fellows Home at 17th and Tioga Streets.

Anyone having knowledge or information regarding these volunteer firemen, please contact Lee Ryan, pfdhc@firemanshallmuseum.org. 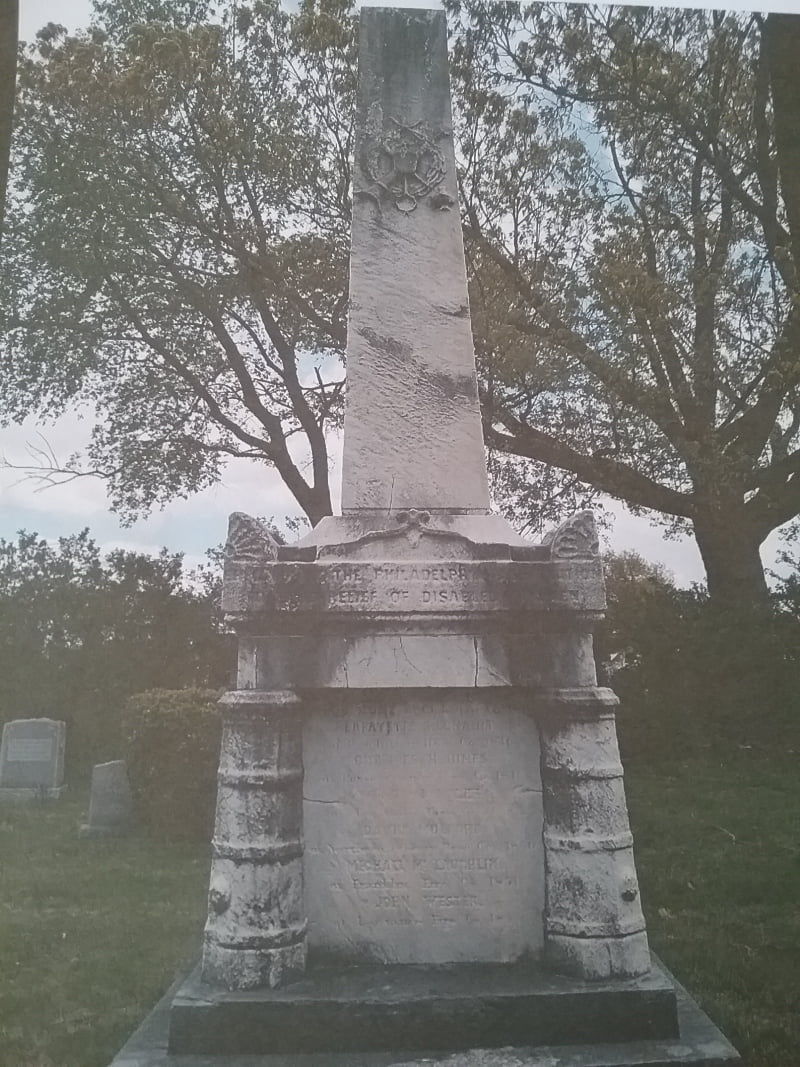