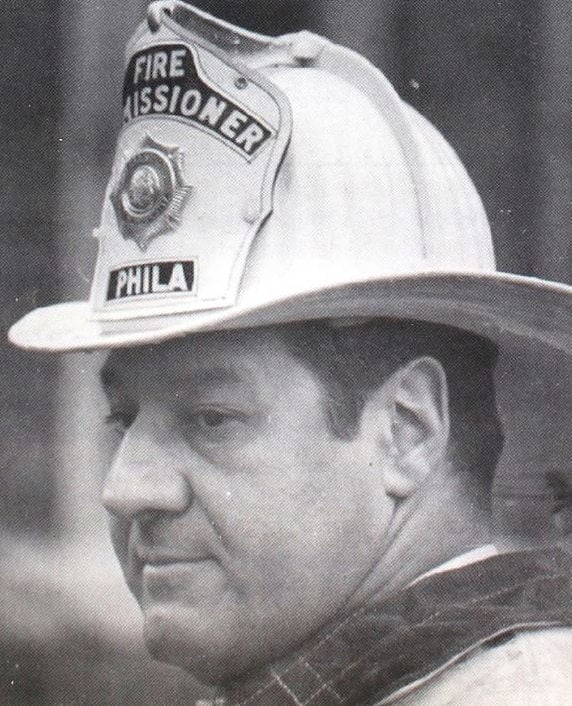 Commissioner Joseph Rizzo was appointed to the Philadelphia Fire Department on June 1, 1947. He was promoted to Lieutenant in 1955, Captain in 1960, Battalion Chief in 1965 and Commissioner in 1972.

It can be said that Joseph Rizzo was one of Philadelphia’s most controversial Fire Commissioners. He was appointed as commissioner on January 4, 1972, just 2 days after his predecessor, James McCarey, resigned. Appointed by his brother Mayor-elect Frank L. Rizzo, his appointment ruffled feathers. Many senior officers were passed over for this appointment and many questioned Rizzo’s qualification for the job.

Commissioner Rizzo was a by-the-book officer and known as a strict disciplinarian. He was opinionated and spoke his mind. This combination did not endear him to many members of the department. But under his hard shell was a soft heart. The safety and welfare of his men always came first. When a man was injured and could no longer fight fires, in lieu of furloughing, Rizzo made efforts to find these firefighters alternate jobs in the department. This included positions in fire prevention and the fire academy. This allowed firefighters to finish their fire service careers and receive a pension. If a firefighter was known to have a drinking or gambling problem, Commissioner Rizzo would make sure the family would receive his paycheck. Sometimes having a courier hand deliver a paycheck to a wife.

Rizzo’s tenure was marked by city cutbacks in services. Mayor William Greene ordered a city wide layoff which included 256 firefighters. During this troubled financial time, two companies were closed. Fire Boats lost their crews, leaving them manned only by a Pilot and Engineer. When a fireboat was needed, the nearest ground company would be sent to the boat. During this time there were many large fires, many four alarms or greater. Several causing the deaths of firefighters.

Commissioner Rizzo was responsible for many innovations and changes during his tenure. As with his predecessors, fire prevention was a priority. He championed the program to place smoke alarms in every home. He fought for the banning of kerosene heaters. Commissioner Rizzo also instituted the Arson Taskforce. This unit consists of Philadelphia Fire Marshalls, ATF agents and Police Detectives. This combination of resources revolutionized the tracking and conviction of arsonists. He also started the Hazardous Material Taskforce. Both of these units were the first of their kind in the nation. Among his accomplishments: the construction of 10 new fire houses, a new Fire Administration Building at 3rd and Spring Garden Streets, and the new Fire Training Academy at Pennypack and State Roads. He initiated training firefighters to become Emergency Medical Technicians and created the Mobil Intensive Care Unit staffed by Paramedics. He created new fire codes for industries and high rise buildings.

Commissioner Rizzo was a student of the history of the fire service, in particular the Philadelphia Fire Department. Even though Fireman’s Hall Museum had been opened in 1967, he supported and promoted the museum. In 1972, he had the museum enlarged and modernized. After his retirement he continued his support.

Commissioner Joseph Rizzo retired on January 4, 1984 after 37 years of service in the Philadelphia Fire Department and 12 years of that as their leader. He passed away on June 8, 2020.