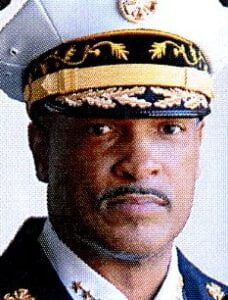 Commissioner Sawyer joined the Philadelphia Fire Department on October 21, 1985. Unlike many people that joined the fire service, he did not have a lifelong desire to become a fireman. He was urged by a friend to take the test. He spent ten years firefighting, honing his skills. On December 18, 1995 Sawyer was promoted to Lieutenant.  On July 18, 2003 he was promoted to Captain. Then on April 27, 2007 Captain Sawyer was promoted to Battalion Chief. He continued his climb, and on December 16, 2011 he was promoted to Deputy Chief. He was put in command of one-half of the cities firefighting forces. Deputy Chief Derrick Sawyer was appointed Deputy Commissioner of Operations on April 1, 2013.  Fire Commissioner Lloyd Ayers retired on June 14, 2014. Mayor Michael Nutter appointed Sawyer Fire Commissioner of the Philadelphia Fire Department.

As with all of his predecessors, Commissioner Sawyer was a firm believer in fire prevention. But he took a different approach. He felt that the one size fits all approach didn’t really address the problems throughout the city. He thought a more localized approach would be more effective. He instituted the Community Risk Assessment Program. Each company would survey its local area and identify the buildings and areas that were at high risk of fire or in need of other emergency services. These areas would be targeted for safety education. This effort allowed local companies to engage more with their communities, demonstrating to the public that the fire department is truly a part of the community.

Commissioner Sawyer saw the value in investing in technology. He started a program to update information databases to make them more accessible and user-friendly.  He was also committed to advocating for the purchase of new apparatus. He worked towards updating the departments aging fleet.

Commissioner Sawyer ended the rolling brownouts. This program closed stations for a day on a rotating basis. The members of those companies would be sent to other companies that were short of manpower. This program cut the amount of overtime paid by the department but left parts of the city unprotected.

Sawyer changed the way medical services were provided. Previously, firefighters would staff the Basic Medical Units on a rotating basis. This would take firefighters out of their companies. He started the Fire Service Emergency Medical Technician (FS-EMT) program.

During his short tenure as Commissioner, Derrick Sawyer oversaw many major incidents, including the Amtrak train derailment. This incident brought national and international attention to Philadelphia and its Fire Department. The department was praised for the professional and expedient manner in which they handled the disaster.