Cantlin’s family moved to Philadelphia in 1837. At the age of 16, he became a runner for the Franklin Fire Company No. 12 and at age 18 became an active member of the company serving until March 15,1871. During that time, he served as engineer and secretary for several years. He was also a delegate to the Fire Association.

In 1861, he enlisted in William McMullen’s Independent Company of Rangers at the onset of the Civil War and served until the company mustered out 90 days later. Cantlin was an expert telegraph operator and was detached to headquarters serving under General Patterson. The general presented Cantlin a certificate of efficiency and faithfulness for his service.

Cantlin suffered several injuries during his time as chief engineer. On April 2, 1880, while racing to a fire, he was thrown from his wagon and sprained his left leg and wrist. In June of that year, he was again thrown from his wagon suffering severe wounds to his body. Later that month, on June 24th, he fell from a roof to the cellar during a fire at Thornton’s Mills fracturing his left knee. This injury prevented him from active duty for several months.

During 1886 and early 1887, he actively took part in organizing the Veteran Firemen’s Association of Philadelphia. He remained a member of the organization until his death.

In July 1892, Cantlin became ill with typhoid fever and died on August 7, 1892. He was the first chief engineer to die while in office. Cantlin is buried in Woodlands Cemetery in Philadelphia. He was known as a natural leader of men, a strict disciplinarian and was mourned by members of the department. 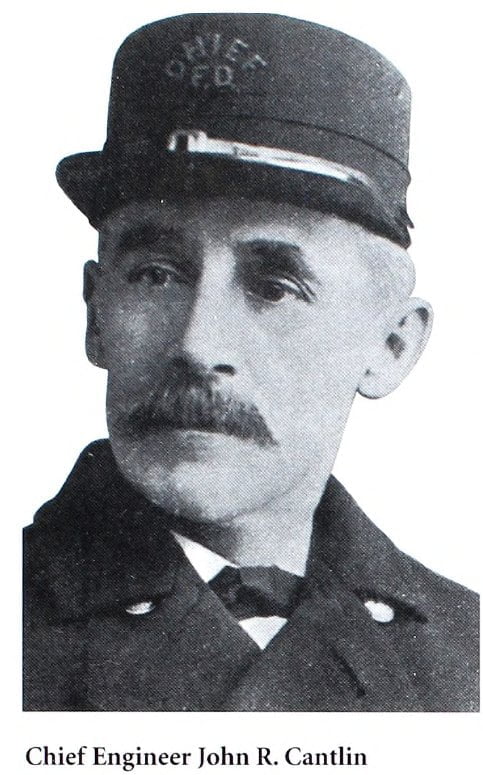