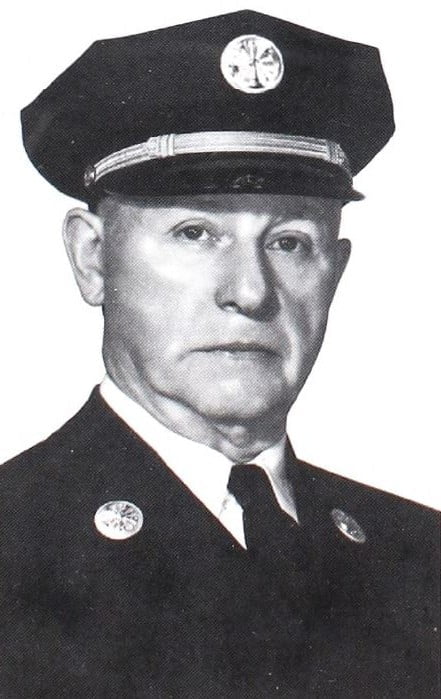 John followed his father George into the Bureau of Fire on April 9, 1910, at the age of twenty-five. He resided with his parents at 153 Poplar Street. His occupation was listed as a driver. John was assigned to Engine Co. No. 15 as a hoseman. He was promoted to Lieutenant of Engine Co. No. 50 on April 16, 1918, and promoted to Captain of Engine Co. No. 29 on March 16, 1921. His promotion to Battalion Chief of the 8th Battalion occurred on July 16, 1930. Cost was provisionally appointed Deputy Chief of the Bureau of Fire on May 16, 1941. That appointment was made permanent on June 2, 1941. He was appointed Acting Chief Engineer on January 1, 1947 and that appointment was made permanent on February 5, 1947. He retired from the Philadelphia Fire Department on May 1, 1952 having served for over forty-one years. (The City changed the City Charter in November 1951 renaming the Bureau of Fire to the Philadelphia Fire Department as it was no longer a division of the Department of Public Safety.)

During his career with the Bureau of Fire, he was a past president of the Officers Association of the Philadelphia Fire Department and served as vice-president of the Firemen’s Pension Fund having been elected to that post in January 1938. Cost was responsible for the city’s new Voice Alarm Public Address System which aided in the dispatching of apparatus. As Chief Engineer he actively encouraged fire prevention and worked at reducing fire deaths in the city.

George Cost
John Clarke Cost’s father, George Joshua Cost joined the Northern Liberty Fire Co., No. 1 in the late 1860s and remained active with the company until the paid fire department commenced service on March 15, 1871. He became a member of the Philadelphia Association for the Relief of Disabled Firemen in 1870. George was appointed to the Bureau of Fire as a hoseman on March 5, 1872, and assigned to Engine Co. No. 6. His address was listed as 1013 New Market Street and his occupation was listed as a Morocco Dresser. George was promoted to Foreman of Engine Co. No. 21 on November 3, 1883. He was injured numerous times during his career and was known for his bravery. He died on December 26, 1911, at his home at 153 Poplar Street in Philadelphia while serving as Foreman of Engine Co. No. 52. He, too, is buried in Holy Sepulchre Cemetery in Cheltenham.