If you monitor Philadelphia fire radio, it’s not uncommon to hear companies going on radio for driver training. With the requirement that each appointee to the department have a valid driver’s license, the bulk of training a driver in the Philadelphia Fire Department takes place at the company level. This was not always the case….
With the Bureau of Fire making the investment in the purchase of motorized apparatus, it was felt a school teaching the care and use of this type of apparatus was needed. On July 25, 1918 the Automobile School was established. The school was located at 3427 Brandywine Street, in a two-story building located directly behind Engine 44’s firehouse. Battalion Chief Joseph J. Wolf was in command. The course was six weeks in duration. Each class consisted of sixteen students. The first two weeks consisted of lectures on mechanical topics such as how engines and transmissions worked. Alternating with this instruction was road work. The attendees would be loaded onto the apparatus assigned to the school and driven to a section of the city where there was little traffic, such as Bustleton. Here each student was given the opportunity to drive the apparatus under the supervision of the instructors. At the end of the first two weeks, those who could handle driving the apparatus continued to the next phase of training. Those who couldn’t returned to their companies.
During the next phase of training, the instruction consisted of more road work and lectures emphasizing driving. At the end of the fourth week of training, the students were taken to be tested for their Pennsylvania state driver’s license at the state testing center located at 29th and Morris Streets. Those who passed the test and received their driver’s license moved on to the final phase of training.
The final phase consisted of only driving. Training drives were gradually extended further into the heart of the city, where traffic problems had to be conquered and narrow, congested streets navigated. During this phase, the trainees also repeatedly practiced backing the apparatus into the firehouse, trying to avoid knocking the building down or tearing off a fender. After each student completed every test to the satisfaction of Chief Wolf, he was sent back to his company a full-fledged driver. 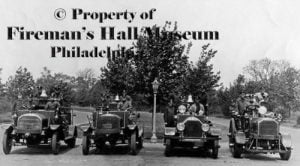 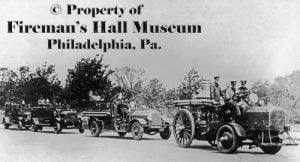 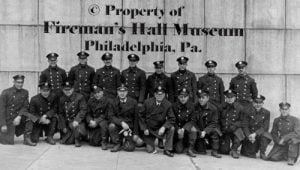